Week 23 in the BUCS season saw a bumper number of Trophy and Vase semi-finals, giving our NTU Teams a chance to make it to the coveted BUCS Big Wednesday event on 25 March. It is here where the best teams in the country will face off for BUCS National titles and Trophy/Vase championships.

Over at Lady Bay (Home of Nottingham Rugby) our Men’s Rugby 1s continued their fantastic league form with a solid win over the University of Cardiff’s 2s 36-21. This takes them to the semi-final next week, one win away from the finals.

On the hockey pitch at Clifton, the Women’s 1s once again proved unbeatable at this level, having already wrapped up the league title and gaining promotion to the National league, this week a semi-final Vase victory against Cardiff Metropolitan University (3-2), keeps alive their hopes of achieving league and cup winners two years in a row! Not to be outdone, the Men’s Hockey 2s, in Trophy cup semi-finals, faced Durham University 3s, coming out 2-0 victors, making them one of the few 2s teams in NTU history to make the Trophy Finals.

Out on the Clifton 3G, our Women’s Lacrosse 1s faced Durham University 2s in a Trophy semi-final that was hotly contested. The girls played fantastically and managed a 15-11 win against the traditional powerhouse in University Lacrosse. They too will go to the BUCS Big Wednesday Finals. Find out more about their season.

Late on Wednesday night, the Men’s Basketball 1s travelled up to face the University of Chester 1s, trying to banish the disappointment of just missing out on the league title last week. The team did just that, with a fantastic 88-85 victory to make it to the Trophy Finals.

Last but not least, our Netball first team travelled all the way up to Newcastle to face Northumbria University 1s. The girls ran out 52-42 winners, making that 6 teams currently in the finals for BUCS Big Wednesday, the most NTU has ever had with the possibility of more next week. 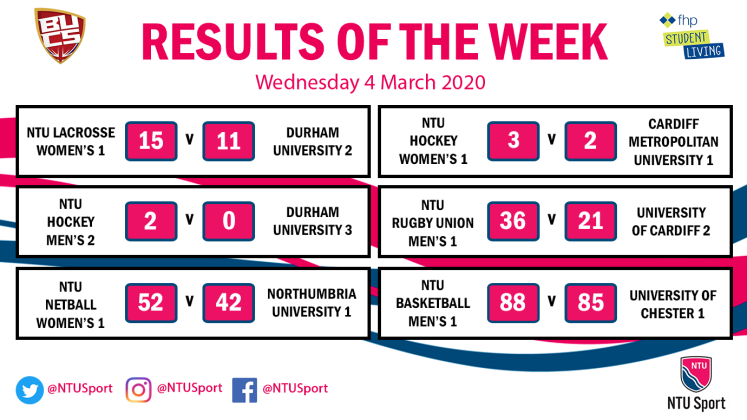