Week 24 in the BUCS calendar and the teams in pink were out in full force. With 4 Conference Cup finals being won, and even more teams winning crucial semi-finals to advance to Big Bucs Wednesday, this week was full of important fixtures.

Starting in Norwich where the Conference Cup finals took place, 6 NTU teams battled it out to take gold. With everything to play for they did not disappoint. The day started with a masterclass from Women’s Rugby Union 1s who secured a 43-17 victory over the University of Derby. Following in their footsteps Rugby Leagues Men’s 2s went back and forth with the University of Northampton Men’s 1s, but a strong finish pulled them over 10 points clear of the opposition to win the second final of the day 31-18. A special mention to the Men’s Rugby Union 1s who overcame Cardiff Metropolitan University 2s to advance to the Vase final at BUCS Big Wednesday.

Away from the rugby pitch Men’s Lacrosse 2s took on the University of Cambridge 1s to be crowned Conference Cup winners after a 9-5 victory, meaning they have done the double having also won their league previously in the season. Another NTU 2s side was also on form at the Conference Cup, as the Women’s Hockey 2s beat Loughborough University 5s 3-0 to bring the total of finals wins up to 4. Well done to all the teams that represented the University at this event.

With BUCS Big Wednesday almost here, this week saw the last few semi-finals take place, lending the opportunity to further grow the total number of NTU teams attending. NTU Lacrosse Men’s 1s have for the fourth year running made it to the final where they will face off against Durham University Men’s 1s having beaten Loughborough University Men’s 1s 9-5. The Women’s Lacrosse 1s also built on a strong performance last week as they comfortably won the league this week, having beaten the University of Nottingham 2s 15-10.

Finally, Hockey Men’s 1s hosted the University of Exeter Men’s 1s for the semi-final. The large crowd who gathered at the hockey pitch were not disappointed. An exciting game with lots of goals took place with NTU winning 7-4 to advance to the final. Hockey as a club have had an amazing season so far earning over 400 BUCS points with the potential for even more to come!

This week has been a real showcase of the talent NTU athletes have to offer, and with 9 teams going to the Big BUCS Wednesday finals the chase for BUCS top 10 is on. 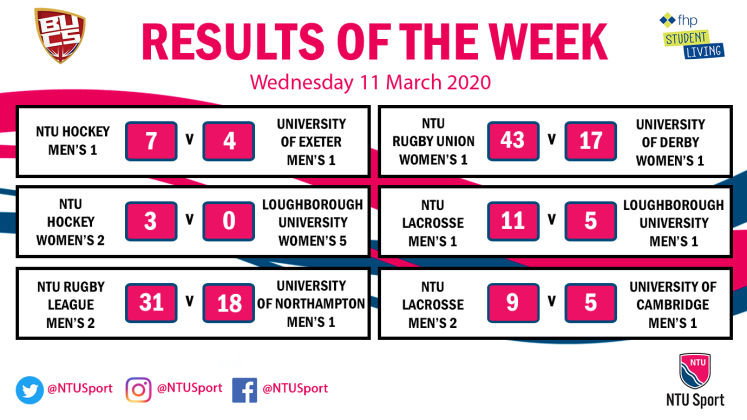